I know I have used this excuse before-but I can assure you that it is always the same reason that I am not able to finish or do something. This post should have been written and posted by no later than the 24th September 2013–but as usual family commitments came up and therefore the post is only being posted today (7th October 2013), however lets just stick to the old cliche that says “better late than never”

At approximately 11am on the 18 September my cell phone buzzed and when I checked it was an email and when I opened it-the subject line read “Congratulations on winning – Good Food & Wine Show Food Bloggers Competition #GFWS2013” even with my arthritic legs & hands jumped for joy, because from years of experience my name just does not pair well with winning. I was beside myself with joy, not only for winning but for the whole experience the “Prize”, brought along, I had planned on going to the GFWS, but winning and then being treated like VIPS was just amazing. So as soon as I received the mail, I forwarded it to my daughter in law, and asked her if she would like to come, unfortunately for me—she was off to Hermanus with her mum for the long weekend. I knew my cousin (Prianka), wanted to go, so I invited her (she is less than half my age), she has just started turning her wonderful hobby of baking into a part time business, and all this is while she is a full time student at Wits.

My prize comprised of:-
2 Entry Tickets into the Good Food & Wine Show
2 Tickets to the Woolworths Real Food Theatre Mystery Basket Cooking session at 10:30am (where you will be cooking as 1 team)
2 Tickets to see a celebrity chef theatre performance of your choice

“Mystery Basket Cooking” and I thought “oh my word” we can’t do that—we are vegetarian-so off I sent a reply to Johan Schroeder (who is involved on the social media side of the GFWS) saying I am sorry to be a pain, but I am vegetarian and only cook vegetarian-and within seconds his mail came back saying he will forward my request to the organizers and get back to me—which he did saying they will organise a “vegetarian mystery basket” for me. I was just amazed at how wonderful and accommodating they were and thought to myself “you know you won a prize and top of that you want to state your requests” lucky for me they obliged and I was a “happy chappy winner”

I was up early on Sunday the 22nd September and looked out my window—and noted that it was most certainly no September Spring Day, it was a cold gloomy windy day in Johannesburg, and I left home around 8.30am to go and fetch my cousin and off we went to the “Coco Cola Dome” in Northgate—I knew were going to be early—but early is good—we waited for a while for the entrance doors to be opened (and lucky for us—we did not have to stand in the long queues-we had VIP tickets) and I went up to one of the security guys there and told him I had this email confirming I had won tickets—but he was not interested in listening to me and very firmly told me to go and stand in the queue-but I was doing no such thing as I had VIP tickets—as soon as the doors opened I made my way to one of the ticket ushers and told him I had won a tickets—he asked for my name shouted across to one his colleagues—“winner Usha is here”, and then we were whisked off to the “Woolworths Real Food Theatre” were we were introduced to a few more contestants for the “mystery box cook off and then we were introduced to the reigning female power of the 2013 Masterchef finalists-WoW & WoW.

The organizers and chefs at the Woolworths Real Food Theatre, were fantastic they created a sort of “Masterchef” atmosphere here everything was laid on our well equipped work stations, Kamini Pather-Masterchef SA 2013 winner was the MC and the other 2 Masterchef finalists were paired with other contestants for the cook off-and yes our vegetarian mystery basket was there all ready for us. Kamini remembered me from all the tweets that I had sent her during the Masterchef series. Our challenge was to create a meal using all the ingredients of the mystery box and any additional ingredients that we needed from the “pantry table” (yes—no Masterchef pantry for us, but a very nice spread of extra ingredients on the pantry table)

We were flagged off—and 30minutes counting began—I loved the ingredients of our mystery basket, and my mind started racing off with ideas—we made a “CHICK PEA CURRY, BROWN LENTIL & MUSHROOM SALAD, BRINJAL & ZUCCINI FRITTERS (not deep fried) & A POTATO & SESAME SEED MASH” (Recipes for these dishes will follow in few weeks). While we were cooking Kamini and her co host were walking around chatting to all of the contestants and asking about the various dishes we all were preparing, this interaction was excellent as each one of us learnt something about each other. Prianka is an excellent baker however at the outset she said she would prefer not to cook and will follow my lead—well we made an excellent team—she shallow fried the fritter and kept a watchful eye on all that was cooking while I chopped and seasoned. Seeing as she is the really artistic one—I let her do the plating as well — 30 minutes up—“STOP COOKING & PLATING”. 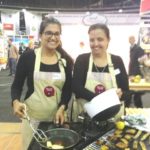 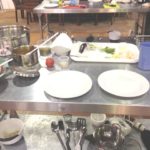 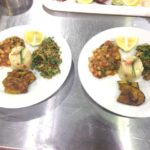 We were all whisked of to a dining table laden with juices and wine – and this is where all we contestants sat down to eat our meals—and taste the other meals (however Prianka and I did not taste other meals- as we are Vegetarian). Now I know I was nervous as our meals were going to be tasted by Kamini and her 2 finalists—my Good God—these 3 amazing young woman have show cased some really amazing dishes during their stint on Masterchef – and now they were going to be tasting our meals. They did enjoy our vegetarian creations and were equally complimentary of the other dishes—and from here we exchanged twitter info and took pictures and merrily went about exploring the rest of the GFWS2013, till the next demo which was by Gary (one of judges on Masterchef Australia) which was at 2pm.

There was far too much to see at the show and my arthritic legs do not help, when there is so much walking (I do wish that at regular intervals there would provide seating—for those of us who cannot just plonk ourselves and sit on the floor). I also found that somehow the map of the lay out handed to us on arrival was a bit confusing—maybe it is me and my age that found it confusing—but I did—for example the stalls in the “R” circle were no way close P Q or S, now for me it would just make sense to have these layouts according to alphabetical order and then have arrows stuck on the floor directing people—A to F in row 1 & G to K in row 2—something that is simple and clearly visible to the OLD/almost blind eye.
Even with my age and blind eye—I did not miss the Le Creuset Stall where they had a Whopping 20% of everything—and the wonderful Natasha of the Bedfordview branch was in attendance and as long as Natasha is there—there is no chance of you walking away empty handed—which of course I had no intention of doing—got some great buys. We walked around and sampled a number of goodies—mind you mostly sweet stuff—loved the toffees and chocolate from the local guys of Drakensburg.
By 1pm we were ready for another little snack and lucky for us we found this amazing little stand that had vegetarian tapas dishes served with Pita-and this is where we let the time get ahead of us and by the time we got to the celebrity chef demo area—the seating area was packed—however there were 2 seats available and we were ushered in—once again my arthritic legs got the better of me and I was unable to climb up the scaffolding seating—but the usher was kind enough to bring me a chair to sit on the side—however as the demo progressed I noticed that the other winners of the VIP tickets were seated close to stage—well I suppose if we were there early enough we might have been there as well—shall have to remember for next time—hoping that I am going to win again.
When I received the mail saying I had won these VIP tickets—I was also asked which celebrity chef I would like to watch and my first choice was Hayden (participant in Masterchef Australia), however I was given tickets to Gary’s demo—and I thoroughly enjoyed his demo—besides being an amazingly great chef he is an entertainer—and kept us entertained throughout the demo—at the end of the demo—I was at my end as well—tired like you can’t believe—so off we went to collect my loot from Le Crueset (as the Wonderful Natasha-offered to keep it for me till I was ready to go home)
Now began the long walk to my car and Prianka and I chatted and I dropped her of at her place and then drove home-I will forever remember this day and the experience—I have always been one to shy away—and take a back seat—however in my old age I am coming out of this shell and all because of my involvement in cooking and trying to be a foodie.
My sincere thanks go to the organisers and social media department of the GOOD FOOD & WINE SHOW 2013, for this wonderful opportunity and experience—LOOKING FORWARD TO 2014 EVENT.

Post a Reply to google plus age limit cancel reply