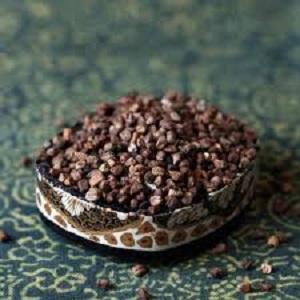 A-Z Spices – June Spice Of The Month Is Elachie/Cardamom

Elachie/Cardamom – as most other spices is native to the Indian Subcontinent and Indonesia – its colourful history dates back thousands of years. One of the first references to elachie – is found in the Ayurvedic literatures of India. Elachie is one of the third most expensive spices by weight and surpassed only by vanilla and saffron – however like other members of the “expensive spice family”, a little goes a long way (10 pods of elachie = about 7ml ground elachie). The very best way to store these precious gems is in their pods – peel and use as needed – once exposed they tend to lose flavour and fragrance.

The two varieties of elachie (black/brown larger pods and very small green pods), were distinguished in the 4th century BCE – by the Greek father of botany – Theophrastus – and he knew that these varieties were originally and solely from India. The green variety has been distributed from India and Malaysia and the large black/brown variety is native to the Eastern Himalayas and mostly cultivated in Eastern Nepal, Sikkim and parts of Darjeeling. In 1914 Oscar Marjus Kloeffer – a German coffee planter introduced elachie cultivation to Guatemala and by the year 2000 Guatemala has become the largest producer and exporter of elachie in the world followed by India

Elachie – one of the most valuable spices in the world – with immense fragrance and flavour is used both in sweet and savoury dishes. Its rich culinary and healing “powers” have earned it the title of “Queen Of Spices” – it is time to embrace and enjoy its versatility. For all those who don’t use it or use enough of it – I will share a number reasons why you should be embracing these precious pods in cooking, baking and for its amazing health and healing properties.

However you choose to use them – but ensure that you do use them.

Spiritually – it has the energy and the power to cut through barriers of confusion and a busy mind to bring about much needed clarity and clear the feelings of depression. Elachie encourages us to become more present – “here and now” as well as awakening the inner realms of deeper insight into life.

Go ahead and get yourself some elachie/cardamom and count your blessings and well-being.

All of the above pictures have been sourced from the internet