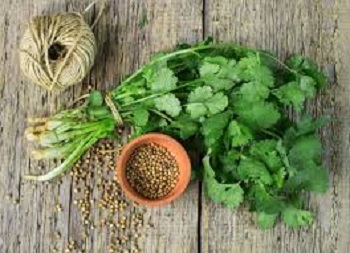 My May spice of the month is “Dhania” ( yes – it can be considered to fall in to the letter “C” – and therefore I am using the name “Dhania” – to ensure it falls under the letter “D” category) as some of us know it and then it is also referred to as “coriander or cilantro” – any which name you use – it is still an amazing herb to cook with and now I have found it is an extremely essential item to add to the “home remedies” section.

You can use the fresh herb – leaves and stems ( best way to store this is in a bottle of water with a loosely fitted lid and in the refrigerator) + the seeds – the seeds will take a few minutes to prepare so that you get all of its benefits – dry roast and then bruise with a pestle and mortar.

Surprisingly not much is known about the origin of the plant – references can be found in Sanskrit writings, it thought to be native to the Mediterranean and southwestern Europe – it dates back to at least 5000 B.C. Coriander is even mentioned in the Old Testament – “the manna provided to the Jews fleeing Egypt was described as being like coriander seeds”. A type of liquor was made by the seventeenth century Frenchmen using coriander and coriander/cilantro was one of the herbs grown by the American colonists of Massachusetts

Coriander is a member of the parsley family and the word “coriander” describes the whole planet – seeds, leaves, stems and roots which are used in Thai curries for an added pungent flavour. The herb is used worldwide as a condiment, garnish, herb and flavourant. It is referred to by many names – coriander, cilantro or dhania (in the Indian Subcontinent and it is grown all over the world. The lemony and floral flavour of the coriander herb and stems lends itself to many Asian, Latin, Indian and European dishes, whereas the seeds of the coriander plant is mostly used in Indian cuisine.

Mostly coriander is used in cooking, flavouring and garnishing, however most of us do not know or use it for all the essential, vitamins and nutrients packed into it and making it beneficial to our health and wellbeing.

Just a few of the essential nutrients that coriander contains:-

Wow! There are an amazing number of health benefits to consuming coriander – and just as many ways for one to be able to include this in your daily diet – and if you do not like the taste or smell of it – add to your smoothies, initial stages of your cooking or to pesto’s – however creative you want to get is fine so long as you ensure it is added to your daily diet.

All of the pictures used in this post were sourced from the internet.

New chutney/sauce recipes made with the amazing herb and spice called “Dhania”, to be featured right here in the next 4-5days